What Can One Land-Owners Learn from MDC's Turkey Research?

For the last few years the Missouri Department of Conservation has been conducting a study on wild turkey populations.  As a land-owner in NE Missouri, we’ve done everything we can to improve the habitat on our small property for all game – especially wild turkeys.  So, when the MDC asked us to participate in the research we immediately said yes.  It’s been a great experience for us and we’ve learned a lot about turkeys along the way.

Last year, the MDC trapped 6 jakes on our place. One traveled so far that they couldn’t locate him, leaving us with 5 birds roaming the woods fitted with backpack transmitters and ankle bands.  Six weeks after trapping, during the 2017 spring season, we had several encounters with these jakes – getting close enough to see their ankle bands – always letting them walk.  One day we ran into them over 1 mile from where they were trapped.  By talking to the guys who monitor their movement, we learned that the birds have been tracked as far as 2-3 miles north and 5-6 miles south, usually returning to our place every 2-3 days.  I knew turkeys ranged far, turns out they cover more ground than I thought, and they cover that ground more frequently than I thought too.

According to one biologist, we have created such good habitat that we are literally drawing in birds from all around.  When turkeys roam across the landscape and stumble across our farm, they will often start to make it the center of their range due to habitat!  Talk about reinforcing the importance of doing habitat improvement work.  Even on small farms, you can have a big impact.

Just last week, the MDC was successful again, this time trapping, tagging and releasing 14 hens.  In a stroke of good timing, I arrived on the farm just after the rocket nets went off, so I got to watch the team process the birds.  I was surprised to learn that all 14 were adults.  We had a relatively good hatch in our part of the state last spring, but that doesn’t always translate to good recruitment.

We asked the biologists if we should expect the banded jakes to disburse before the 2018 spring season, now that they are 2-year-olds.  He said they would probably always use our property.  That’s good news, because we really hope to “remove” 1 or 2 of them from the study program (if you know what I mean).  As jakes, they acted very dumb and gullible – I doubt they will be so cooperative this spring, but we will let you know if we put a banded tom gobbler in our logbook 😊.  For more info on the MDC study:  https://mdc.mo.gov/conmag/2015/04/keeping-tabs-turkey-numbers 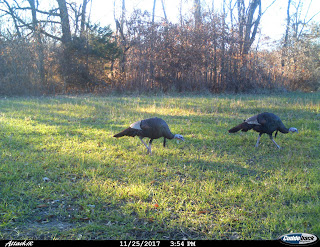 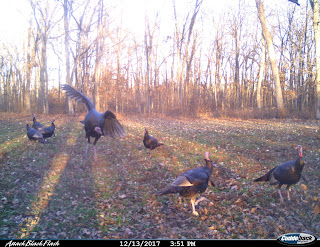 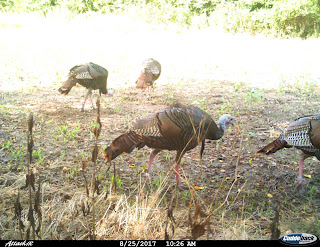 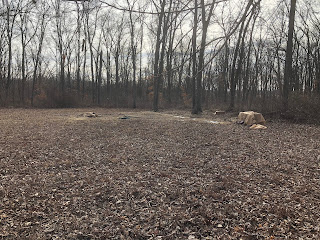 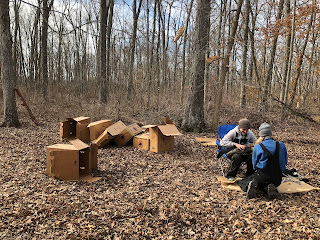 Posted by OutdoorMetrix at 11:15 AM